UPDATE SEPTEMBER 2021: AT LAST SOME NEWS!

Here we are three quarters through our 50th anniversary year, with some good news on the horizon.
Our latest plan is that subject to the Local Enhanced Covid Measures which will be announced in the next few days,
we recommence rehearsals on Tuesday, Sept 21st from 7-9pm in St Michael’s Church, Helston.
This is to comply with social distancing requirements.
Our first concert will be on Saturday October 30th also in St Michael’s Church as usual, and will be Parts 1 & 2 of Haydn’s Creation.
We will also being singing in St Michael’s Advent Carol Service on Sunday, November 28th at 6.30pm
Please come and help us celebrate what’s left of our special year.

50th ANNIVERSARY YEAR 2021
This certainly hasn’t gone to plan! It looks as though we’ll squeeze in just the one concert this year, and our planned but rearranged Psalm Concert in 2022.

We are breaking with tradition this year, and will be holding our Winter Concert before Christmas, rather than in January the following year as we usually do. On Saturday, 14th December 2019, at 7.30pm in St Michael’s Church, Helston, we will be singing a rich selection of mostly less well-known Christmas music.
Buxtehude: Das Neugeborne Kindelein; Mendelssohn: two items from Christus op 97; Vaughan Williams: Fantasia on Christmas Carols; M. Haydn: Viderunt Omnes;
Charpentier: Messe de Minuit.
Do come and join us.

We look forward to another ambitious new venture with our next summer concert, on Saturday, June 22nd 2019, at 7.30pm in St Michael’s Church, Helston, when we will be performing  Henry Purcell’s semi-opera,  KING ARTHUR. The piece has a VERY cxomplicated plot, involving love, magic, quaffing, trumpets and flag-waving. Definitely not to be missed!

Our next concert at 7.30pm on Saturday, January 26th 2019, in St Michael’s Church, Helston, conducted and directed as always by Nigel Wicken, has the title:
ANCIENT and MODERN.
The ANCIENT will be two pieces by W A Mozart: Little Sparrow Mass k220,
and the Lauretian Litany k195.
The MODERN consists of several pieces; James Macmillan’s Lux Aeterna, and New Song,
Judith Weir’s Two Human Hymns, and the first performance  (i.e. world premiere!)
of Evening Hymn, a piece for choir and organ by local composer, Pippa Drummond.
We are delighted that our guest organist will once again be Michael Hoeg, who has played so magnificently in several of our previous concerts.

The Helston Chamber Choir and Orchestra Summer Concert will take place on Saturday, June 30th, 7.30pm, in St Michael’s Church, Helston, when we will be presenting a semi-staged version of Purcell’s Dido and Aeneas.
All the female soloists are members of the choir, and the male soloists have sung with us on several previous occasions.
Be prepared for courtiers, witches, and sailors, in quick succession!

We are delighted to announce that Nicholas will be singing the part of Evangelist in our performance of Bach’s St John Passion on March 17th 2018, at 7.30pm in St Michael’s Church, Helston.

Nicholas Hurndall Smith studied music as organ scholar at Corpus Christi College, Oxford, before training as a singer at the Guildhall School of Music and Drama under David Pollard. He has since been equally at home on the operatic and concert stages, in roles by Handel, Haydn, Mozart, Britten and Stravinsky and he appears all over the world with a variety of conductors and ensembles, with Monteverdi & Bach being special favourites.
He recently sang in the acclaimed Bach Weekend with the Feinstein Ensemble at Kings Place, performing Bach’s Cantata Ich armer Mensch, ich Sündenknecht and the B minor Mass. With the London Concert Choir he has sung Haydn’s The Seasons and the Mozart Requiem, and Britten’s St Nicolas with both the London Mozart Players and the English Chamber Orchestra. He has also appeared with Fretwork in a recital of Purcell and Dowland.
Nicholas has been a member of the solo voice ensemble I Fagiolini for the last thirty years, taking part in their innovative staged productions, films, recordings and tours. Last summer saw them in a revival of How like an Angel with Circa at the St. Olav Festival in Trondheim, and this year they have been touring their new Monteverdi recording ‘The Other Vespers’.
Nicholas also enjoys adding alpine and rock climbs to his repertoire. In June he completed a unique ‘double’, climbing the Old Man of Hoy and running the Hoy Half Marathon in one weekend.

Helston Chamber Choir is proud to announce our next concert :

We had the great pleasure and privilege of singing at the beautiful and moving marriage ceremony of our alto, Beth, with her fiance Greg, on a sunny winter’s afternoon. 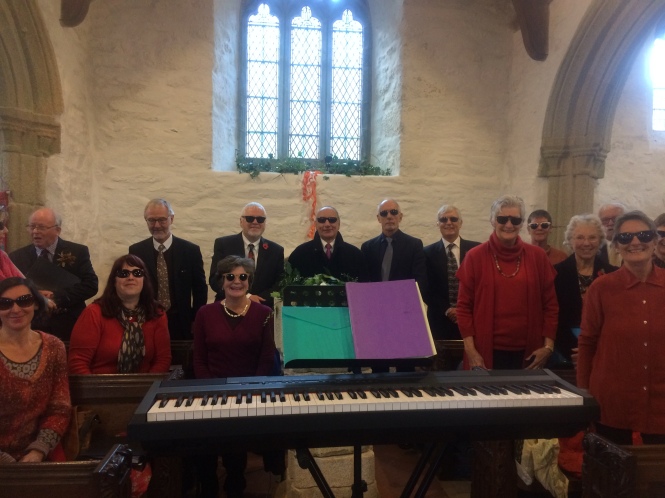 Members of the choir, dressed in autumnal colours at the Bride’s request, preparing to sing the Theme from Terminator 2 at the entrance of the Bride, at the Groom’s request!

The very happy couple after the ceremony

Please see the Join Us page for latest information.

We meet for weekly rehearsals on from 7.00-9.00 onTuesday evenings at St Michael's Church, Helston, TR13 8GT. For more information about joining Helston Chamber Choir see Join Us at the top of this page.
Loading Comments...
%d bloggers like this: